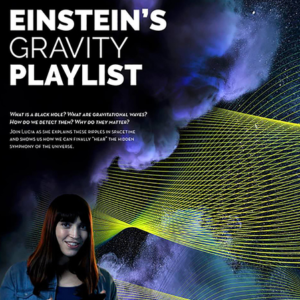 This planetarium show will take you on a journey to explore the ripples in space-time known as gravitational waves. Albert Einstein first predicted the existence of gravitational waves in 1916, and a century later, scientists detected these waves using incredibly precise laser technology here on Earth.  In honor of this long-anticipated detection, the scientists who created the Laser Interferometer Gravitational-Wave Observatory (LIGO) won the Nobel Prize in Physics in 2017.  Follow Lucia, a PhD student in physics, on an exploration of how gravitational waves are formed, how they move through the universe, and how scientists like her work to hear them.

Please note: all planetarium shows start on time and no late seating is permitted. Our show schedule is subject to change. We recommend checking our calendar before your visit for the most up-to-date schedule. Click here for planetarium admission prices and more info.

July 10-16: Out There – The Quest for Extrasolar Planets

Phantom of the Universe

GET YOUR DUCKS IN A ROW! Park here for University of Oregon Football Games
Parking Passes
Eugene Science Center is Lane County's only hands-on science museum and planetarium, located in beautiful Alton Baker Park in Eugene, Oregon. Learn about science and technology through hands-on exhibitions, discover astronomy in the planetarium, and be a part of special events and programs that come to you year-round. We promise each visit will be a fun learning experience!
Eugene Science Center is a charitable non-profit organization, federal tax ID: 93-0688763
Copyright © Eugene Science Center. Website donated by Partnered Solutions IT & Ruby Porter Marketing & Design
Back To Top